Weigh Station Rules: Everything You Need to Know

Weigh Station Rules; Everything You Need to Know

All truck drivers will have to stop at a weigh station along the interstate at one time or another. It will feel like an inconvenience, as it takes time away from the driver’s actual drive time; however, weigh stations provide an essential service.

Weigh stations are designed to keep everyone on the road, including the truck driver, safe. If you understand the why and what of the weigh station, it will make your stop at one as swift and painless as possible. Doing what you can to be prepared for the weigh station you’ll inevitably encounter on your route will help you avoid turning a minor inconvenience into a major headache. With that in mind, here are some things to be aware of about weigh stations.

Most states require that any commercial vehicle weighing over 10,000 pounds stop at a weigh station along the interstate. According to federal law, a loaded truck cannot weigh more than 80,000 pounds. Exceptions are sometimes made, but these are only made if the cargo cannot be broken down or separated. It’s important to remember that these exceptions expire upon the delivery of the load and cannot be rolled over onto another load.

The weight limits have been adopted for a good reason, and they have not been put into place just to make life miserable for truck drivers.

Trucks that are overloaded pose severe risks on our highways, both to the driver and other motorists. Even under perfect conditions, a truck weighing over 80,000 pounds can be challenging to control. If conditions become unfavorable, heavy rain, snow, dense traffic, vehicle control becomes even more difficult.

Overloading a truck puts undue pressure on the tires, which may increase the probability of a blowout. A blowout on a highway while traveling even at the posted speed limits can cause significant traffic, bodily injury to the driver and other motorists, and even death.

Overloaded trucks are also more prone to rollovers, causing traffic hassles for those sharing the highway, severe delays for the truck driver, maybe even loss of load and loss of life.

Stopping distance also increases when a truck is overloaded. This adds to the higher likelihood of collisions with other drivers.

So, making sure your load is meeting but not exceeding the legal weight is imperative for drivers. Stopping at a weigh station is one way of ensuring that you’re not overloaded and that you’re not posing unnecessary dangers to yourself or those you are sharing the road with. But, there is more to a weigh station than its name lets on.

What Goes On at a Weigh Station?

Obviously, the primary purpose of the weigh station is to ensure that a truck is not overloaded and thus a danger to the driver and other motorists. Trucks may be assessed by axle, or the entire vehicle may be measured.

If the truck is determined to be overloaded, the vehicle may be held at the weigh station until arrangements can be made for another truck to take the excess.

So, weighing the vehicle is the primary goal of the weigh station; however, there is more.

Some other checks and regulations might occur when you pull into a weigh station. For example, officials may take the time to check your ELD (electronic logging device) to ensure that you comply with the hours-of-service regulations.

An official may also check to make sure the truck isn’t leaking any fluids, such as antifreeze, oil, or fuel. A truck that fails inspection at a weigh station may be taken off the road until the driver has satisfactorily remedied the issue.

To make the stop at a weigh station as easy as possible, here are a few tips on what to have ready beforehand.

If there are other trucks at the weigh station, fall in line with them and wait your turn. From there, it’s pretty simple, follow all signs and obey all instructions and directions given to you by weigh station officials. For the sake of other drivers, please follow the posted speed limit as you drive over the scale. And follow all instructions that relate to stopping or slowing down as you approach the scale. If you choose not to comply, you’re making a very bad decision, and you’ll cause undue delays and seriously inconvenience all other drivers at the weigh station.

The next thing to happen is your truck will be weighed, and you may have your equipment, or your ELD checked. If you’re inspected and have problems with the truck or your ELD, a more detailed inspection can occur. This can lead to significant delays.

To ensure that you’re keeping your log accurate, personnel at the weigh station may enter your DOT number into a computer and execute a check on your safety rating.

If everything is in order and your equipment is in good shape, the entire event shouldn’t take very long at all.

If you know a weigh station is in your future, the best way to be prepared and make the entire process move quickly and smoothly is to perform a check before you hit the open road. Yes, while it’s true that problems can occur when you’re on the road, it’s always wise to make sure things are in order before you leave.

Make sure your load is not over the limit; all your logs are in order before you set out; this can ensure that you avoid delays down the road.

Here’s another tip; be polite. Yup, simple as that, take a breath, stay calm and always be polite to weigh station personnel. They are just doing their job, and what they do may save your life or the lives of other motorists. Be courteous and professional. If you’re rude, caustic, or belligerent, you’re not getting through any quicker, and it simply makes the entire process unbearable for everyone involved.

So, what happens if the load is overweight?

If the truck is overloaded, there could be harsh fines attached to the driver. The penalties will vary depending on the state. The fines can range from a few hundred dollars to over $10,000 per offense. In most states, repeat offenders can expect to be charged double, even triple the amount of a standard fine.

Fines vary by state; in Rhode Island, they charge $125 per pound over the legal limit. This can lead to a single fine of $57,000. It’s true. This happened in Warwick, RI; a truck was stopped by the side of the highway because its load, a 560,000-pound generator, was seven times higher than the legal weight allowed by state law without a special permit.

Here is a list of overload fines by state.

As far as who pays the overload fines, a driver is always responsible for any driving violations unless there is a contract in place that clearly states the company will cover all fines.

What If You Don’t Stop?

The law clearly states that anyone driving a commercial vehicle must stop at an open weigh station they come upon. Again, if the weigh station is not open, there is no longer a need to stop.

The penalties for not stopping at a weigh station vary state by state. In some states, you may risk losing your CDL; in others, you could be facing jail time.

Weigh stations are equipped with cameras and catch pictures of trucks that pass by without stopping. Eventually, that information finds its way to law enforcement officials and, if the truck is tracked down, a driver can face a fine of up to $300 in most states.

If you do skip the weigh station, you run the risk of being pulled over by law enforcement. They could direct you to return to the missed weigh station.

Once you’ve returned to the weigh station, the officer could perform a level 1 inspection. A level 1 inspection, or the North American Standard Inspection, is the most thorough DOT inspection. It's a detailed inspection of both the truck and the truck driver. The inspector will examine your seat belt, tail lamps, steering wheel, exhaust system, and everything required for driving safely. Needless to say, this is a time-consuming process that is easily avoided by not skipping the weigh station.

It’s also important to note that more fines can be added to what the driver is already being fined for with this type of inspection. The more violations found during a level 1 inspection could drag down scores in Federal Motor Carrier Safety Administration programs used to rate drivers’ safety and how often they are inspected.

The most straightforward answer, don’t skip the weigh station. 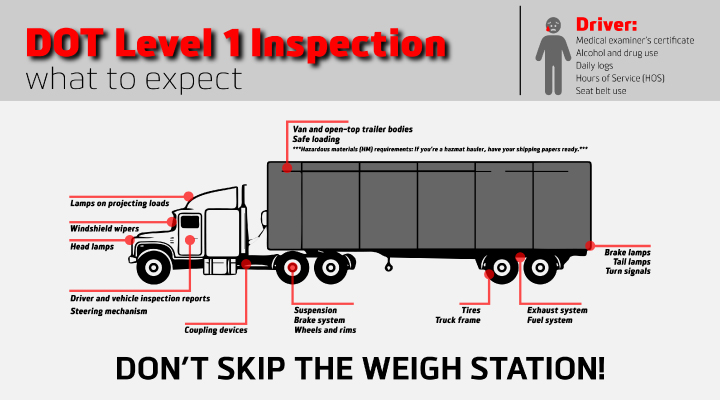 Yes, with everything else being virtual nowadays, there are virtual weigh stations. These types of weigh stations use a weigh-in-motion system. This system provides information on vehicle records and weight without stopping the truck and interrupting traffic flow.

A virtual weigh station will provide real-time weighing of a commercial vehicle by determining the vehicle’s gross weight based on the number of axles, their weight, and spacing.

A Pain With Purpose

Yes, it is a fact; having to stop at weigh stations can be a pain in the tokhes that’s no secret. However, they do provide a valuable service as far as highway safety goes. If you’re prepared and your vehicle is in top-notch condition, then stopping at a weigh station should be an uneventful process. If you worry that your truck is not in the best shape, maybe you need to drive with a company that runs the best fleet in the business and is passionate about maintenance. Perhaps you should be driving with Pride Transport.

Either way, it behooves you not to skip the open weigh station; you’ll avoid heavy fines and law enforcement pulling you over or even getting slapped with that level 1 inspection. The main goal is that everyone on the highway gets home safe and in one piece; certainly, the short amount of time spent at a weigh station is worth it when you look at it that way.

Previous Article
The Ultimate Semi Truck Maintenance Checklist
Next Article
Team Truck Driving, Is it Right for You?
Share this article