Long haul drivers, in particular, often find themselves staring straight ahead, looking at the empty road, becoming almost hypnotized. Sometimes a driver can find they have gone 500 miles without remembering a foot of it. When the hum of rubber on the road, the miles driven, the emptiness of the highway come together in the perfect storm and the driver appears to mentally check out, they are experiencing what truckers call, white line fever. Although it’s never good to check out when driving 80,000 pounds down a highway, is white line fever that bad?

What is White Line Fever?

The technical term is Highway Hypnosis, and the term White Line Fever is the hypnotic state often found when driving long distances where a large amount of distance is covered without the driver remembering the majority of it.

The name Highway Hypnosis was coined in 1963 by G.W Williams who was building on the theories of Ernest Hilgard. Hilgard was an expert on hypnosis who posited and proved that hypnosis was an altered state of awareness, not a person being asleep. So, for drivers, the mind functions and the body reacts in appropriate manners but they don’t remember the drive.

Highway Hypnosis is actually a perfect example of the phenomenon called automaticity, the ability to perform actions without consciously thinking about them. Now, this may sound frightening to some but, for an experienced trucker this isn’t actually a bad thing.

White Line Fever can be very dangerous, or even deadly. The biggest problem comes when drivers, non-professional, mistake highway hypnosis for tired or sleep-deprived driving and the two are vastly different. Truckers can experience both automaticity and tired driving and it’s important to keep the two separate. One might think that driving on automatic is dangerous, however, automaticity may actually be superior to conscious driving for professional, or skilled drivers.

This is due to the “centipede effect” named after the fable “The Centipede's Dilemma” or “Humphrey’s Law”, after psychologist George Humphrey. Humphrey said; “No man skilled at a trade needs to put his constant attention to the routine of work. If he does, the job is apt to be spoiled.” Where does the centipede come into this? Well, in the fable, the centipede is walking along just fine, using all his many legs, just doing what he does every day. Suddenly, another animal asks how he is able to walk with all those feet. As soon as the centipede thinks about it rather than just doing what comes naturally, his legs got all tangled up and he fell over. For truckers, an experienced driver will find themselves in the midst of highway hypnosis but instead of being “checked out” they will automatically scan the environment for threats and alert the brain of danger. They are so comfortable and well equipped for the job that the body and the mind react as normal and keep the driver safe. This is automaticity in action, proving Humphrey’s theory.

When a trucker, who is experienced and spends 60% of his life behind the wheel, finds himself in a  trance-like state, you can be pretty sure what he is experiencing is highway hypnosis or white line fever. This is vastly different from the non-professional who finds himself in the same situation. For non-professional drivers or even some very new truckers, the dull, trancelike state they are experiencing is really falling asleep at the wheel. They are not hypnotised, they are tired driving.

While a driver in the midst of automaticity will react and take in other cars and obstacles on the road, the tired driver gets tunnel vision and a profoundly reduced awareness of other drivers and obstacles. What’s worse is these tired drivers will often hyper react to situations. When a tired driver suddenly snaps back into the present reality, they will overcompensate for dangers that don’t really exist; sharply turning the wheel, slamming on the breaks, etc, because they have literally woken up and, for a second, they have no idea where they are. This, as opposed to automaticity, where the driver is completely awake, is the dangerous difference between the two.

According to the National Highway Traffic Safety Administration (NHTSA) fatigued driving accounts for 100,000 collisions per year and about 1550 deaths. Studies have shown sleep-deprived driving is more dangerous than driving under the influence of 0.05% blood alcohol. With white line fever, the driver is fully awake but in an altered state of awareness, fully functioning and aware. The tired driver is just the opposite.

While tired driving is exponentially worse than automaticity or white line fever, neither is the optimal situation for drivers. Truckers will talk about white line fever as feeling odd, feeling removed from themselves and they worry about forgetting miles of the drive. One is marginally safer than the other but, it’s best to avoid both.

How Can I Avoid White Line Fever or Highway Hypnosis?

If you’re driving along and you suddenly experience not being able to recall the last few miles of driving, any near misses with other vehicles or roadway obstacles or you start drifting over highway lines or rumble strips, you may be tired and you definitely need to pay attention. Here are some ways to combat tired driving or white line fever. 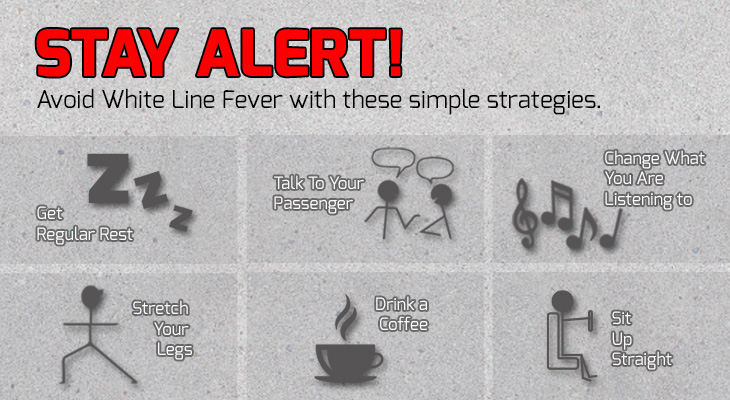 Regular rest is a must if you’re driving long distances or driving constantly. Make sure you’re resting at approximately the same time every day. A regular schedule for rest allows the body to “look forward” to when it will rest. Good sleep is vital.

Get Out and Stretch Your Legs

Stop and get out of the truck or the car and walk around. Even a short jaunt for ten minutes is going to get the blood flowing and the mind resetting. Some truckers, who are working under a deadline, say they cannot afford the ten minutes, but, really, can you afford not to?

Change What You Are Listening To

Listening to the same music or the same talk show can numb the mind a bit so, switch it up. Try a different genre of music for a few hundred miles, get a book on tape going. Sing along with the radio, listen to language tapes and learn a new language. Anything that’s going to keep your mind engaged and awake.

I know moms say this all the time, sit up straight, stand up straight and it was annoying but, it’s actually good advice. Adjusting your posture, sitting up straight when driving long distances, actually improves blood flow to the brain and helps the body fight against kinks, strains and pinching. Be Cool David Letterman famously kept the temperature in the Ed Sullivan Theater low, the comedian liked a cooler theater to avoid sweating on camera but, he also said it kept his audience awake. Well, he was right. Keeping your cab at a lower temperature will help keep you awake and keep that white line fever at bay.

There’s nothing like a hot cup of joe to keep you awake and present. Drinking coffee or any caffeinated beverage, will help you stay awake. Caffeine acts as an antagonist to adenosine receptors and wakes up the system. Hot or cold, caffeine is a good way to wake up the system if you feel the white line fever coming on.

Talk To Your Passenger

Engaging your passengers in a conversation often times will force your brain to snap out of highway hypnosis and “wake up”. Consider talking to your passengers. If you are a professional driver and always having a passenger isn’t feasible, consider getting a dog to bring along with you.

A lot of truckers own dogs and they like to take the dog along on the road. This is really a good idea for a few reasons. First having the company of your best buddy just makes the time pass quicker and more happily. Also, having your best friend in the cab with you makes you more aware of the world beyond yourself. With another being in the car, you’re naturally more awake and aware because you are, even subconsciously, thinking about their well being.

White Line Fever The Song and The Movie

In 1975 director Jonathan Kaplan made the film “White Line fever”. The film features a young man who becomes an independent long haul truck driver in Arizona. The protagonists spends the movie fighting off the corruption of the local trucking industry. The film has an IMDB rating of 6.1/10.

White Line Fever has been a popular subject for art for along time and yet, it’s not that entertaining when it’s happening to you. Most importantly, the difference between white line fever and sleep-deprived driving is very important to keep in mind. Use some of the suggestions here to keep yourself safe on the road and, if you have a particular way of staving off the fever, why not leave it here and help others on the road stay safe as well.